The Minister of Agriculture and Rural Development, Chief Audu Ogbeh, on Monday flagged of the Governor David Umahi  administration’s one-man, one hectare agricultural programme in the state. 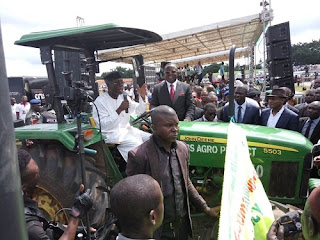 The ocassion which was  witnessed by the  Minister of Health, Prof. Isaac Adawele, was kick started with  the planting of palm trees at Ezillo Farm and a symbolic tree of peace at Ishielu Local Government Area headquarters. The symbolic tree was  to commemorate a  peace agreement between Ezillo and Ezza-Ezillo.
Speaking at the Abakaliki Township Stadium  where thousands of women and youths had gathered to witness   the grand finale of  events,  Ogbeh pledged Federal Government’s support to Ebonyi State in its agricultural programme.
He said, “We are going to bring machinery here. We hope that before we round up, there will be a major industrial starch plant in this state. We also believe that we will  let you have some cassava flour processing plants, especially  for cassava, fufu, very nice food to eat. We shall bring you another crop, cashew nut, because the demand for cashew nut in the  international market is high.
You are famous for rice production, but you are going to be more famous when we bring our programme for implementation.
“Today, I assure you that  we shall join hands with you to make your rice production plan  work. We shall make sure you get the best seed, especially the F.44. It is about the national standard we have because in Nigeria today, there are over 70 varieties of rice. We cannot grow all.”
The minister, who also promised to bring rice harvesters and threshers to Ebonyi State, commended Governor Umahi for the robust agricultural programme, especially the  one-man,  one-hectare policy.
Challenging politicians and civil servants to have a second address in agriculture, he said that   poverty in the country was not acceptable. 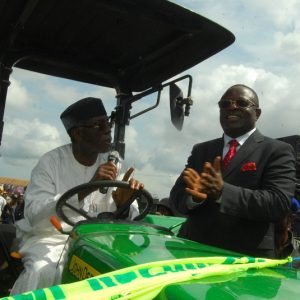 He explained that there was hunger in the country today because Nigerians had been lazy in the past by focussing on oil and importation of everything, including toothpicks.
“What your governor is doing is going to be strongly supported by us. We shall support you with good seeds. And before the year runs out for the rice harvest, we shall bring in small machines to help you harvest your rice. And for those of you civil servants, politicians and so on going into agriculture, should take the business seriously,” a statement by Umahi’s Chief Press Secretary Emma Anya quoted the minister as saying.
Ogbeh, who in company with Umahi, later gave out a symbolic cheque to one of the beneficiaries of the state’s youth and women empowerment programme, told the youth that the governor, had by his actions “handed over the key to prosperity” to them.
Umahi had in his opening remarks explained that the agricultural programme was aimed at ensuring food security for the state and the country. He said his administration had among others,   procured 40 tractors, distributed  farm seedlings and gotten soft loans for  genuine farmers in the state.

AgroBusiness Times - August 14, 2019 0
Recent technological innovations and the support of the government mean that there has never been a better time to venture into the South African farming industry.