—As Experts Caution Against Overuse Of Chemicals

The extension of the European Union (EU) ban on export of beans from Nigeria has started to take its toll on agricultural produce exporters, especially those who trade in beans, as they continue to generate less foreign exchange.
In June 2015, the EU banned Nigeria’s bean imports on the ground that they contain high levels of pesticide considered dangerous to human health. But few weeks to the expiration of the June 2016 date, meant to lift the ban, the body extended it for another three years, based on what it considered as “not doing enough to address the issue.”
Not many had expected that the one-year ban could be extended, especially with the much-hyped efforts of the Federal Government and Nigeria Agricultural Quarantine (NAQS), but the ban was extended for three good years.
The grouse of EU was that Nigerian dried beans contain high level of pesticides residue, between 0.03mg/kg and 4.6mg/kg, far above the Maximum Residue Limit (MRL) of 0.01mg/kg.
Also, high level of other chemicals like Chlorpyritos, Cyhalothrin, Dimathoate, Trichlorphon and Omethoate, were discovered. These are all pesticides that are intentionally applied to plants, to attack invertebrate pest and plant diseases and also utilised in the storage of beans, but the presence of their residues prove high risk to human health.

With these, the EU concluded that the pesticide had rendered the beans unacceptable, hence dangerous to human health.

According to information outlined in the EU Commission Implementing Regulation 2015/943, 50 notifications have been issued since January 2013 through its alert system to Nigeria, concerning dried beans containing high levels of dichlorvos pesticide.
Further information revealed that 13 border rejection alerts on dried beans had been issued by the United Kingdom authorities between January to July 1, 2015.
To stakeholders, the ban extension is not only unexpected, but also ill timed, especially when the country is set to diversify into agriculture, in the light of the dwindling oil price.
Prior to this period, Nigerian farm produce had found it difficult to gain access to EU markets because of high food safety standards, especially dairy products.
According to health experts, the chemical, dichlorvos is considered to be highly toxic and if ingested can result in convulsion, dizziness, sweating, difficulty in breathing, abdominal cramping, diarrhoea, vomiting and loss of consciousness. It is a confirmed human carcinogen and a suspected endocrine system disruptor.
Other possible effects likely to emanate from the consumption of beans with high level of pesticides include, asthma, allergies, hypersentivity, hormone disruption and problem with reproduction.
In the light of this, export promotion officials have announced fresh plans to improve quality of the country’s agricultural produce, in their desperate bid to meet up with EU’s standards to facilitate sales.
An Organic Agriculture expert, Shile Dokunmu, who decried the development, said the ban would impact negatively on the economy as agricultural produce exporters; especially those who trade in beans would generate less foreign exchange within the period.
He noted that the way out is for all stakeholders to work harder, in order to get it right, noting that farmers should be sensitised to do the right thing beginning with the period of planting. “I want to call on government and other stakeholders to focus more on the use of organic farm inputs to ensure safety of consumers and the environment. 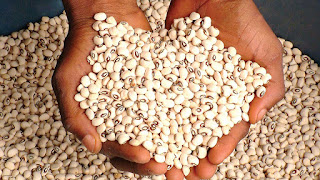 “The development, is no doubt an eye opener to government and other stakeholders who have ignored standard practices over the years. There are organic fertilizers, pesticides and other bio-inputs, which leave no harmful residue in the soil or in the crops, yet people keep using the dangerous chemicals.
A member of the Farm Inputs Support Services Department, Eche Emmanuel disclosed that most of the people who sell and use the pesticides have little or no knowledge of them, adding that majority of them don’t even know how to apply them.
“Not less than 74 per cent of our farmers purchase their pesticides from the open markets. Only a fraction of eight to 12 per cent of them obtains theirs from farmer groups and cooperatives, government agencies and non-governmental organisations.
“Research has shown that farmers apply the chemicals themselves, while a handful of them employ services of hired applicators and family members using knap snack sprayer. Cases of cancers and other incurable diseases are related to the poor use of chemicals like pesticides,” he said.
The head of NAQS department of collaboration, planning and international trade, Christopher Onukwuba, though sometime ago, blamed the ban on over-use of pesticides by farmers, he however, said the extension had harped on need for product regulatory agencies to redouble their efforts.

AgroBusiness Times - December 31, 2014 0
“By the time you go to sleep tonight, we would have spent one billion naira importing rice. Don’t we have rice on this land? This...