Rivers State governor, Mr Nyesom Wike has said that the state government has created the right platform for foreign direct investment in the agricultural sector in the state. 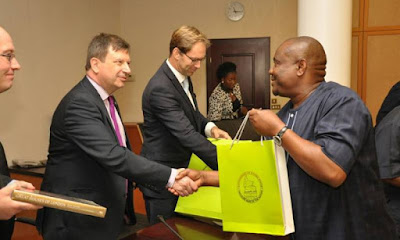 The governor also stated that the state government has started the preliminary process for the construction of a Specialist Tertiary Hospital in the state.
He spoke at the Government House, Port Harcourt, yesterday, when he granted audience to the Minister for Africa, United Kingdom Foreign and Commonwealth Office, Mr Tobias Ellwood and the British High Commissioner to Nigeria, Mr Paul Arkwright.
Governor Wike said that the development of basic infrastructure across the state was geared towards attracting foreign investors. Pledging to always cooperate with the United Kingdom to enhance the development of Rivers State, the governor noted that his administration will grant access to land backed with certificate of occupancy for willing investors.
He said: “We are promoting  partnership in the area of agriculture because  we believe that it will create employment  opportunities  for  our youths. “The current economic recession requires that we look inwards. We have improved the security  architecture in the state and it is the best investment  environment  in the region and the country.” Earlier, Mr Ellwood said that the United Kingdom will assist the Nigerian Government in its bid to diversify her economy.
He said that the visit was also aimed at improving the relationship  between the United Kingdom government and the  Rivers State Government. Ellwood assured the Rivers State Government of the support of the United Kingdom in her bid to empower Rivers people through  project implementation.

AgroBusiness Times - December 28, 2017 4
Are you a Nigerian looking for something to do as business or you just graduated from the college and you are still waiting for...

Flood washes away farm lands in 5 LGAs in Kano