Scientists have found worrying evidence that fish are becoming toxic, as their environments are being polluted with billions of microbeads – the tiny plastic particles commonly found in face scrubs, body wash,  and other cosmetics. It has been known for a while now  that microbeads act like tiny magnets for pollutants, capable of concentrating these substances up to one million times. 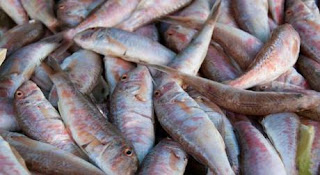 But even though it’s long been suspected, this is the first study to show that the toxins attached to microbeads can contaminate fish directly. A team from  RMIT University in Australia finds that fish can absorb up to 12.5 percent of the pollution from microbeads.
“We know generally that if someone eats a fish, they risk eating any pollution that may be in the fish,” said lead investigator Bradley Clarke. “Our next step is to determine the implications of our findings on microbeads for public health,  working out the significance of this exposure pathway and precisely measuring how much pollution could be entering this human food chain.”

Microbeads are in a huge amount of different cosmetic products that can be washed down our sinks and into the ocean, where fish can’t help but to consume them, because they’re so small.

These microbeads then end up sitting in the stomach of fish, and, just like any plastic, they attract and concentrate toxic chemicals – including a  class of pollutants called polybrominated diphenyl ethers (PBDEs), which are known to cause neurological problems, decreased immune function, and even fertility problems.

Clarke and his team fed Murray River rainbow fish microbeads that had been spiked with PBDEs, in levels that mimic the real-world environment. They then tested the amount of PBDE present in the fish tissue after 21 days, and compared it to a control group that hadn’t eaten microbeads.
The results showed that  up to 12.5 percent of the PBDEs on the microbeads had leached into the tissue of the fish – which is a problem, because that’s  what  we end up eating.
The researchers have yet to prove that these pollutants can leech into the human system from fish tissue we eat, and they still need to replicate this result across more than one fish species.   The team’s findings were published in  Environmental Science and Technology.

AgroBusiness Times - September 13, 2018 0
Just like commercial poultry breeding, dog breeding has been viewed by experts as a sustainable business with the possibility of creating jobs for the...