The Federal Government’s plan to make agriculture the main­stay of the economy is being threatened by a power tus­sle between the Minister of Agriculture and Rural De­velopment, Chief Audu Ogbeh and the Minister of State for Agriculture, Sena­tor Heineken Lokpobiri. 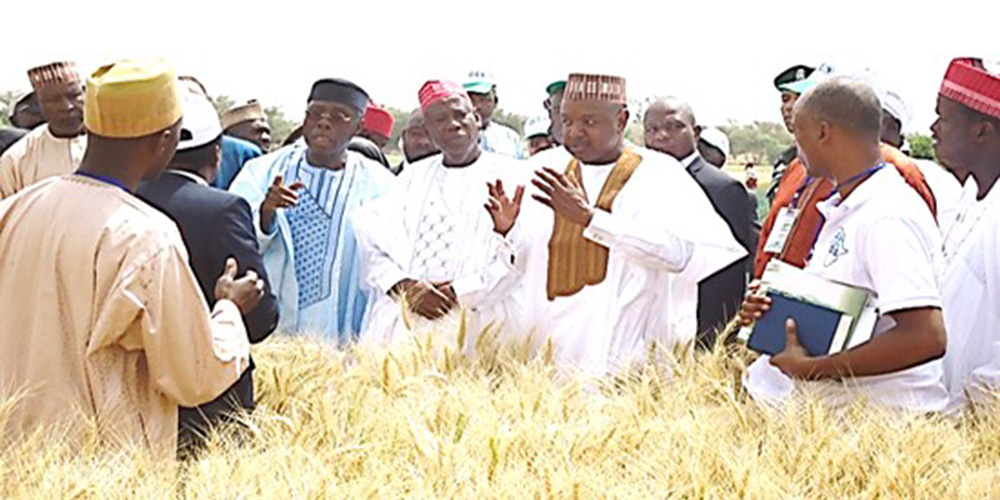 Lokpobiri, who had tol­erated Audu’s alleged over­bearing influence, decid­ed to express his grievances yesterday when he refused to show up at the launch of the Agricultural Road Map in Abuja.
Reliable sources in the ministry accused Ogbeh of running the ministry with his aides with hardly any in­put from Lokpobiri.
The sources alleged that about 115 trailers which were among those hired by Ogbeh to lift the 10,000 tonnes of grains to the North East zone are allegedly missing in transit.

The officials also ac­cused Lokpobiri of forc­ing the allocation of grains worth N145 million to himself early last month with the connivance of a very top official of the ministry.
One of the officials said that Ogbeh was not in the know of the deal.
Only a few weeks ago, the two ministers were accused of taking a N2 billion bribe from the ministry’s contractors.

On the sour relationship be­tween the ministers, a director in the ministry claimed that Og­beh prefers to deal with his spe­cial aides rather than conferring with the Minister of State.
He said that soon after the presidential directive to ferry 10,000 tonnes of grains to the insurgency-ravaged North East zone, Ogbeh contracted a haul­age company for the transpor­tation of the items without re­course to both the Permanent Secretary and Lokpobiri.
The official said: ‘’The cur­rent administration is just jok­ing with the idea of making agri­culture the hub of the economy because those in charge are not only ignorant, but are corrupt and not even working together to achieve the aim of the Presi­dent. They should be dropped or redeployed for those who can turn the place around to come on board.
‘’Can you imagine Ogbeh hiring a haulage company that has less than 15 trailers to ferry 10,000 tonnes of grains to the North East zone? What is re­quired is about 355 trucks, but the minister hired his friend without the input of the PS and Lokpobiri and in the pro­cess, about 115 trailers got miss­ing and till now, they are unac­counted for.
‘’Even the so-called Ag­ricultural Roadmap that was launched yesterday was without the input of the minister of state and that perhaps informed why the man stayed away from the programme because even at the level of the committee that pre­pared it, he was not informed; he had no input.
‘’He protested when it was presented to the ministry for consideration and the worse was that he did not know Ogbeh was taking it to the Federal Executive Council (FEC) until he saw the document. Ogbeh did all these with his aides who bullied direc­tors to key in.
‘’But some of us who felt for the minister of state got our disappointment when we dis­covered that he engaged in the forceful allocation of grains to himself to the tune of N145 million. He had sought the as­sistance of a buyer for the grains, who was brought in by a direc­tor in Lokpobiri’s office.
‘’We got to know when the buyer, who had been promised five percent of the sum was not paid in full but was given a paltry sum less than N1 million by the minister of state,” he said.
It was gathered that the two ministers were fingered in a bribery scandal concerning a recent part-payment of N15 bil­lion to contractors owed by the ministry. The contractors exe­cuted projects under the fertilis­er subsidy programme, Growth Enhancement Support Scheme (GESS) introduced by the ad­ministration of former Presi­dent Goodluck Jonathan in or­der to enhance farmers’ access to subsidised fertiliser.
The amount was part of a N56 billion debt owed the con­tractors by the Federal and state governments participating in the programme but the minis­try is in charge of payments to contractors.
But following the release of N350 billion by the govern­ment for the payment of its con­tractors owed by government as contained in the 2016 Budget, the Ministry of Agriculture and Rural Development was allo­cated funds including N15 bil­lion to effect the part-payment to over 50 contractors owed by the ministry.

Following the release of the money to the ministry, the two ministers called a meeting of all the contractors owed by the ministry in Abuja. At the meet­ing, Ogbeh confirmed the re­lease of some funds to the min­istry including N15 billion being part-payment for work done by the contractors, most of which were carried out in 2014.
The contractors were as­sured that payment would be made in such a way to cover all the contractors owed by the ministry, pending the release of more funds by government. The ministers assured the contrac­tors that they would be paid on “pro-rata” basis. But to the cha­grin of the contractors, the min­istry expended the N15 billion on only three contractors, one of which was a fertiliser and agro-allied company linked to a for­mer governor of Delta State.
But investigations showed that the payment was a product of a decision to deduct N2 bil­lion from source and concen­trate the payment on only three contractors. The three contrac­tors were paid N13 billion, leav­ing in the lurch the rest of the contractors, who were earlier promised payment on a pro-ra­ta basis, a ministry official nar­rated.
When The AUTHORITY contacted the Special Adviser on Media to Ogbeh, Dr. Olukayo­de Oyeleye, he asked the report­er to direct the question on the alleged power tussle to the min­ister of state.
He however said that “the minister of state is minister of state.”
Oyeleye said that he would not comment further on the matter and asked the reporter to come to the ministry on Tues­day (today).
On the missing trucks with grains, he said the food going to the North East for humanitari­an purposes does not fall within the purview of the ministry but the National Emergency Man­agement Agency (NEMA).
Earlier in an interview, Og­beh had debunked the allega­tions of N2 billion fraud.
He said: “…And this is poli­tics; a few weeks ago, some peo­ple said we were paying money to some people and the Perma­nent Secretary, myself and the Minister of State stole N2 bil­lion. Well, how was the money stolen? The Minister of Finance handled the payment, it didn’t come to my ministry; how do you take money you never saw?”

AgroBusiness Times - December 20, 2016 0
In the 80s, cocoa was arguably one of the major cash-crops relied upon as a foreign exchange earner, which serves as the major employment...