As the nation seeks a way out of its economic recession, the Ooni of Ife, Oba Adeyeye Enitan Ogunwuis, Ojaja II, has called on the three tiers of government to focus on agricultural development and youth empowerment programmes as panaceas to quick recovery from the economic crunch. 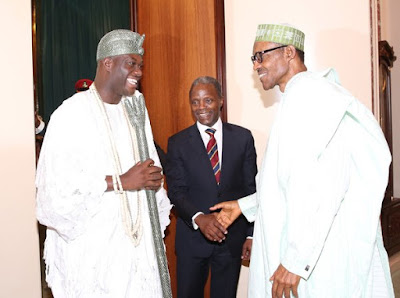 The monarch who made this remark while addressing a Media team in his Enuwa Palace, said the blame game by the leaders of the country should be put to an end while focus placed on how best to fix the problem of the country, calling for a return to agricultural development programme and youth development as quick fixes.
According to the Ooni, Nigeria is a richly blessed country and therefore advised that government should focus its attention in area of agriculture, citing the focus of his palace on agriculture and youth development. Noting that the youth formed over 70 per cent of the country’s population, the monarch advised that they should be meaningfully engaged in productive ventures so as to avoid implosion by those who are becoming more restive by the day. “We are number in agriculture, everything about agriculture are number one, we are blessed with good soil from the South to the North of the country.’’
He however lamented the fact that the land has been neglected and that no one is encouraging and inspiring the youths to meaningful ventures. It is for this reason, he said that he has taken it upon himself to inspire and encourage youths by introducing them to agriculture, cultural tourism, tradition and heritage of the people, which he said has been fully embraced by the people.
He pointed out that his focus is on cocoa as he said that it has a very high potential for yielding foreign revenue for the country and the people and that it is labour intensive and requires less input in terms of mechanised farming.

AgroBusiness Times - March 6, 2017 0
Ever wonder how to break though yield barriers? Or maybe how to tweak your crop rotation to make sure it’s firing on all cylinders?...