Olam Nigeria, one of the world’s largest buyer of agro commodities, has  trained 10,000  farmers  and supported them with  seedlings to replace the current aging trees. 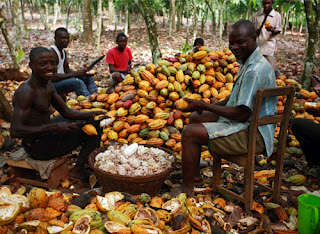 Vice President & Head Corporate and Government Relations, Olam Nigeria, Ade Adefeko, explained that I0,000 farmers  were trained in good agricultural practices (GAP) across 200 cocoa growing communities in three states,while 185, 399 cocoa seedlings were distributed.
He said his organisation’s  assistance is aimed at removing difficulties in cocoa planting. As part of  Olam Livelihood Charter (OLC) to invest in the rural communities of emerging countries across the world, he said, 10 borehole projects were provided last year to supply clean drinking water to rural communities previously relying on streams.
On rice, he said, his organisation has created direct linkages between it and the farming community from seeding till purchase of paddy at collection centres, adding that the rice was bought at a competitive price from the farmers.

Last year, he said 4077 farmers were mobilised during the wet season in Nasarawa State alone.
On cashew, Adefeko said 5000 farmers received GAP training while it partnered Techno serve to trained 5000 farmers.
To boost sesame production,  he said seeds were distributed to  10000 farmers, while 1800 sesame farmers participated  in GAP training. The farmers, he added,  benefitted from credit facilities for inputs such as fertilisers, sickles and sieves.
He said his organisation  is  providing  high quality seeds (675 Hectares) to small holding rice farmers to discourage the use of grains as seeds year after year, which lead to yield and quality depression over successive generations.

30,000 Rice farmers to benefit from dry season farming in Bauchi