Nigeria’s plan to spend less on food by restricting access to dollars for importers could have the opposite effect by threatening food supplies and pushing up prices.

President Muhammadu Buhari ordered the central bank on Aug. 13 to stop dollar supply for food imports, saying food security has been achieved and agricultural production has increased. That came after Governor Godwin Emefiele said in July the central bank plans to cut off dairy importers’ access to foreign exchange in a bid to bolster domestic milk output.

The food price index in Africa’s largest oil producer has risen almost 80% since the start of 2015, pushing inflation above the central bank’s target and putting pressure on households’ finances in a country where about 60% of consumption spending goes to food.

“Many of us are agitated by this food import ban,” said Abosede Ogungbemi, who sells imported rice, wheat and other food items in Nigeria’s capital, Abuja. “Food will become scarce and very expensive.”

The central bank already restricts access to dollars for the import of 40 kinds of items from cement to soap. In June, the Lagos-based Punch newspaper reported that Buhari instructed the central bank to blacklist companies or individuals caught illegally importing palm oil or other prohibited goods, such as poultry.

Nigeria spent about $1 billion importing food and live animals in the three months to March, according to the statistics agency. Domestic food-supply chains have been disrupted by a decade-long Islamist insurgency in the northeast region. Clashes between herdsmen and farmers have also decimated communities, destroyed crops, killed cattle and forced producers to flee to protective camps in Nigeria’s northern and central regions. 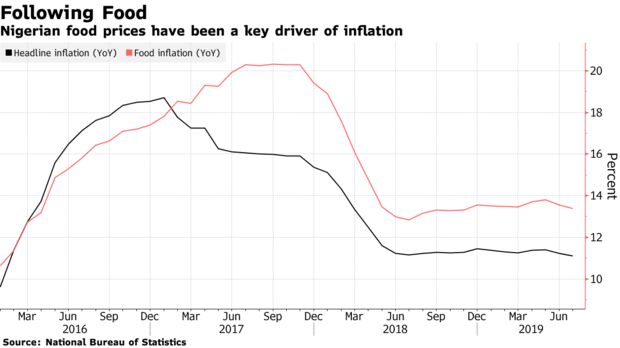 “Many families have abandoned their farms and the crops on them have either been stolen, destroyed by war or abandoned,” said Henry Kam Kah, a senior history lecturer at the University of Beau in the Southwest region of Cameroon.

Still, Buhari and Emefiele insist Nigeria can produce all the food it needs, and the dollar ban will help with that. That’s even as large quantities of rice and other goods are being smuggled into the country, according to the president.

The restriction is “certainly counterproductive,” said Nonso Obikili, director of the Abuja-based Turgot Centre for Economic Policy Research. “Nigeria currently does not grow many of the key food products we consume and such a restriction will likely have the dual effect of higher food prices and increased smuggling.”

The United Nations’ Food and Agriculture Organization last year said Nigeria is one of 37 countries in need of external food assistance.

“We can’t produce enough food,” said Suleiman Adulaziz, a wheat grower in Born state in the northern region. “Banning food imports without supporting farmers and creating an enabling environment to produce food on a large scale is condemning Nigerians to hunger.”

NALDA pledges support for youths to return to farm

Bean varieties you may consider this planting season

AgroBusiness Times - February 29, 2016 0
During the last several decades, forest product processing technologies have undergone extraordinary advances in some of the above categories. Improvements have been achieved in...

NALDA pledges support for youths to return to farm

Bean varieties you may consider this planting season