As Government Plans To Boost Research Into Local Production Of species.

The Federal Government said a whooping $700m is spent on annual importation of fish in terms of foreign exchange.

The Minister of Agriculture and Rural Development, Audu Ogbeh who disclosed this during a courtesy visit by Triton Aqua Ltd., lamented that it is no longer sustainable for government to continue to spend such amount on fish import.
He, however, hinted that more funds would be provided to the research institutes to scale up research work into the local production of other fish species, aside the regular catfish and Tilapia.
He said, “Government can no longer sustain the high importation bill on fish. We need to start looking inwards to see how Nigeria can produce some of these fishes both for local consumption and then importation.
“We will also encourage massive investment in artisanal fish production, to meet the protein needs of Nigerians, because it has been discovered that lack of protein in some women have led them to developed fibroid.”
While pledging to collaborate with Triton Aqua on fish production to reduce the annual fish import bill, Ogbeh urged the company to train more people in fish production so as to have sources of livelihood.
The minister, however, disclosed that the ministry had acquired 100 hectares of land in Gaube area of the Federal Capital Territory and it would be developed like Songhai Farm in Kwara State, where young people would be trained on modern farming techniques, adding that the company would be invited to also support government in youth training.
Also speaking, the Director, Federal Department of Fisheries, Mua’zu Mohammed, who commended the investment of the company, cautioned on the production of tilapia fish.
“I am not comfortable with the rearing of tilapia, and in Nigeria we have over 200 fish species because from what we have gathered, all over the world it is not easy to rare tilapia, because of its feeding pattern and could also escape into the wild,” Mohammed stated. 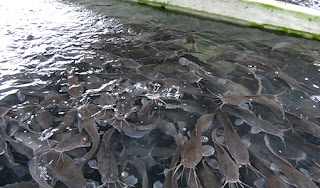 The Chairman, Triton Aqua Ltd, Ashvaran Samtani, called on government to support the company in acquisition of land for expansion of its investment and to access the Gurara Dam in Kaduna State and Doma Lake in Nasarawa State.
He said it has invested $15m in Nigeria’s aquaculture industry in the first phase, and in 2017, it would complete the investment of $15m wherein it would produce 10,000mt of tilapia and catfish annually to add value in Nigeria.
“We are also going to produce 70,000mt of catfish and tilapia with government’s support in five years and create 3,000 jobs for young people in Nigeria. We are also setting up our feed and hatchery company. We used to be a trading company, but now a producer, which is in line with government’s drive to diversify the economy. We will continue to expand our investment.”

AgroBusiness Times - August 18, 2017 0
There are different edible mushroom varieties like oysters, shiitake and button mushrooms. One may choose the variety to grow depending on the taste he/ she...