Monday, 29th August, 2016 will, for a long time, go down on record as a day that a uniquely august occasion was witnessed by farmers, agro-business gentry and other numerous stakeholders, in Oke Odan.

This was the official launch of Mokk Investments Limited 6,000 hectares of Cassava farming project, which is a development and empowerment programme organized within the catchment area of Ogun-Osun River Basin Development Authority, in Oke Odan Community of Yewa South Local Government Area, Ogun State.
Speaking at the event, the Chairman of Mokk Investment, Mr. Kunle Abdul, said among others that the mandate of this project is to cultivate 6,000 hectares in the first phase which will engage an average of 5,000 farmers, and 10,000 farmers in the second phase with a planned production of over 2.5million metric tones of Ethanol and starch, regularly, upon commencement of full cassava processing activities.
According to him, under this project, Mokk Investments plans to provide development training and employment for youths, emphasizing that unlike previously, there is now enough market and buyers of the cassava produce. During the event, a modern Planter farming equipment which is used to do clearing, planting, treatment, ferterlizer application and harvesting was unveiled. Hence farming has, accordingly, become quite simplified and is undertaken today as a muti-million naira project by farmers.
Also speaking about its company’s readiness to be involved in the agricultural programme, Mr. Tiko Okoye, the MD/CEO of Fortis Microfinance Bank, said that they are in partnership with Mokk Investments Limited having confirmed their sincerity about the Cassava production project, which they have agreed to finance while Mokk Investments will provide all seedlings and farming machinery in collaboration with a Brazilian agricultural firm known as 4iGreen and another German company, GIZ.  In his words, the purpose of the cassava agricultural project is to diversify the economy from dependence on oil and gas, which has witnessed dwindling fortunes of recent. Farmers will operate in micro groups and in that way, everyone benefits – the government in the form of a diversified economy, the community in terms of greater growth and improved mechanized agricultural practices, and individuals by way of greater capacities and actualization in improved farm produce and financial breakthrough. Hence it is all a win-win situation which we have to see to complete success, working together as a group. 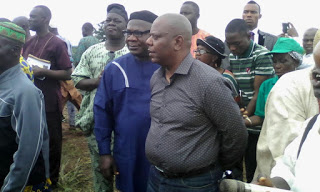 The highpoint of the event was the tagging of Oke Odan, where the Cassava project is being carried out as the Cassava capital of the world, by the Kabiyesi of Oke Odan who gave his blessings. Also available to specially convey his joy and prayers at the official launch of the cassava project, was Kabiyesi, the Onitoro of Itoro who declared that he was the most favoured by this cassava project sited in Oke Odan. Other dignitaries present were Mrs. Kehinde Jokotoye, who harped on the benefits of  the 28 hectares Cassava Revolution Programme embarked upon by the Ogun State Ministry of Agriculture at Ikenne, stressing that farmers must know how to care for their produce and maintain their farms in order to avoid waste during harvest, while Oyesanwen Adekunle representing the Permanent Secretary, Ogun State Ministry of Rural Development , expressed the ministry’s readiness to support the cassava project in Oke Odan, imploring  farmers to take advantage of this rare opportunity provided by Mokk Investments Limited. Over 130 farmers were in attendance at this outstanding event.

Border Closure Windfall: With Naija Rice Project you can earn 40% ROI every 6 months!