Kogi State Government on Thursday began the sales and distribution of 100 trucks of fertiliser and other agricultural inputs at subsidised rates to farmers in the state. 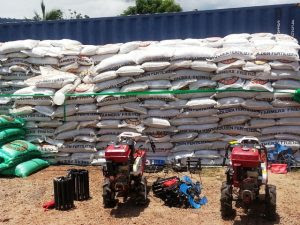 The State Commissioner for Agriculture and Natural Resources, Mr Tim Dichie, disclosed this at the distribution of farm inputs and launching of “Option ‘A’ Road Map (Option Agriculture of Kogi State)” in Lokoja.
Dichie said that the term “Option ‘A’ Road Map” was fashioned out to put Kogi on the rapid developmental pedestal and to realise her potential in agriculture.

He said that 100 trucks of fertiliser were being made available to farmers at subsidised rate of N5,000 per bag.

“Agriculture, which is the best and most viable alternative, must take over from our reliance on the dwindling oil revenue for rapid development, and set the pace for food security.
“It will also generate the much needed youth employment opportunities and empowerment, revenue from farming activities will also serve as the hub for economic growth in the State and nation.
“This event is to officially flag-off the road map for a new vibrant and prosperous state with various agricultural facilities put in place to enhance food security and revenue generation.

“It will also enhance industrialisation, attract foreign investments and partnership, and reduction of crime rate. 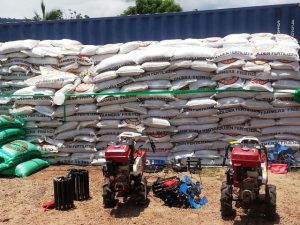 “We should be able to feed ourselves conveniently and also feed other states with the endowment of vast fertile land available in the state,’’ he said.
In his speech, while declaring the Option ‘A’ Road Map, the governor, Alhaji Yahaya Bello, commended the commissioner for the giant strides the ministry had achieved in agriculture so far.
Bello, who was represented by the Secretary to the State Government (SSG), Mrs Folashade Arike, said the Option ‘A’ Road Map would serve as a blueprint for the Ministry of Agriculture and Natural Resources from 2016 to 2020.
Pledging his unflinching support for all farmers across the state, the governor urged the farmers to make good use of various opportunities available to them in his administration.
The News Agency of Nigeria (NAN) reports that other farm inputs to be distributed to farmers include crop boosters, conditioners, 1,470 power tillers, enzymes, sprayers, agro chemicals, assorted seeds and liquid fertilisers.

AgroBusiness Times - January 15, 2020 0
The pumpkin is popularly known as ugu. It is a native plant of West Africa and is mostly grown and consumed in the southern...

Ban on importation of NPK fertiliser will save Nigeria $500m annually...