President Muhammadu Buhari has disclosed that in the effort to diversify the economy and create more jobs, his government has embarked on reviving all the 12 river basin authorities in the country. 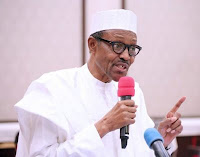 The river basins are: Anambra – Imo, Benin – Owena, Chad Basin, Cross River, Hadejia – Jama’are, Lower Benue, Lower Niger, Niger Delta, Ogun – Osun,  Sokoto – Rima, Upper Benue, and Upper Niger. He disclosed this in his 56 Independence Anniversary speech, yesterday.
The intention, according to the president is to eventually “fully commercialise them to better support crop production, aqua –culture and accelerated rural development.” In addition, government is introducing Water Resources Bill, encompassing the National Water Resources Policy and National Irrigation and Drainage Policy to improve management of water and irrigation development in the country.
To further boost farming, he disclosed that the Ministry of Agriculture and the Central Bank have been mobilised to encourage local production of rice, maize, sorghum, millet and soya beans, towards achieving domestic self-sufficiency in these staples by 2018.

President Buhari said to meaningfully drive the agricultural initiative of his government, farmers in 13 out of 36 states are receiving credit support through the Central Bank of Nigeria’s Anchor Borrowers Programme.  As part of its benefits of the credit support, Kebbi State, this year alone, he said, was expected to produce one million tons of locally grown rice. “As part of the 13 states, Lagos and Ogun are also starting this programme. Rice alone for example costs Nigeria two billion USD to import. The country should be self-sufficient in basic staples by 2019.  Foreign exchange thus saved can go to industrial revival requirements for retooling, essential raw materials and spare parts.  It is in recognition of the need to re-invigorate agriculture in our rural communities that we are introducing the LIFE programme,” he said.