Governor Rochas Okorocha of Imo State on Wednesday launched Rice Anchor Borrower’s programme, with a charge to every adult in the state to embark on farming of rice among other products. 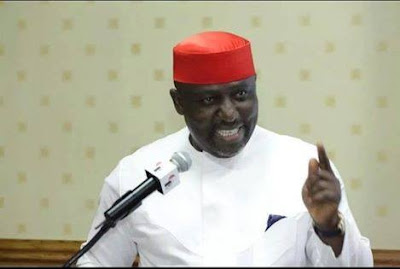 He also disclosed that the state had accessed N9 billion from the Central Bank of Nigeria as approved for the state by the Federal Government for the project aimed at offering loans of about N210,000 to desirable person willing to accessed it.
In the ceremony held at Imo International Convention Centre (IICC), attended by the governor of Kebbi State, Abubakar Atiku Bagadu, a former governor of old Anambra State, Jim Nwobodo, officials of the CBN, among others, the governor declared that no land should be allowed fallow in the state, urging people to have the arrangement with the government to farm on lands.
Okorocha, said every enabling environment would be given to willing rice farmers to ensure that they actualize the aspiration, adding that in the North, the project was taken serious, even without much rain fall, maintaining that enough rain naturally falls in the Southeast , and Imo in particular to ginger farmers farm on rice.
He also charged religious priests , civil servants and rural dwellers to key into the project, stressing that it was one of the promises fulfilled by the All Progressives Congress (APC), led administration.
All the rural development leaders and women, in the communities, in the 27 Local Councils, Okorocha, charged, to ensure maximum utilization of the opportunity.
The governor extolled the Kebbi state governor for taking the lead in the project.In his speech, the Kebbi State governor, Bagadu, said the state government took the project very serious in 2015, stressing that the product was being produced in large quantity, advising that Imo should take it serious to succeed .
Commissioner for Agriculture, Environment and Natural Resources, Udo Agoha, who had explained the modalities for obtaining the facility, said his ministry was prepared to drive the programme.

Border Closure Windfall: With Naija Rice Project you can earn 40% ROI every 6 months!