The Federal Executive Council (FEC) has approved the implementation of the “Green Alternative’’, a road map towards diversifying Nigeria’s economy.

The Minister of Agriculture, Mr Audu Ogbeh, made this known on Wednesday in Abuja while briefing State House correspondents at the end of the Council’s meeting, which was presided over by President Muhammadu Buhari.
Ogbeh stated that the policy objective of the document, which has a four-year implementation period (2016 to 2020), is to make agriculture the biggest alternative to oil and gas business in the bid to diversify the economy.

“We have just concluded a (Federal Executive) Council meeting in which two issues were discussed.
“One is the roadmap for agricultural operations in the next three years which we presented to council, today.
“It outlines our policy and our objectives in trying to see agriculture as the next and biggest alternative in our drive to diversify the economy of this country.
“The document is titled, “The Green Alternative’’ and it outlines virtually everything we need to do, every policy we need to undertake to achieve self-sufficiency in agriculture and also to become a major exporter of agricultural products, a situation we occupied many decades ago.’’ 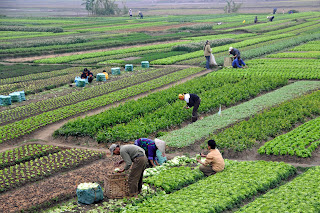 He said government was aware of the sufferings of many families caused by food shortage.
Ogbeh, however, stated that government is working hard to reverse the situation through the implementation of various agricultural programmes.

“We are working hard on the staples to satisfy local production and we are fully aware that there is a major concern in the country for food self-sufficiency and that there is crisis in many families as a result of serious shortage of food.
“But we are working hard ‎and thank God that ours has not become as bad as one South American country, which was also a major oil producing country, by that I mean Venezuela which situation is definitely a 100 times worst than ours.
“But the point is that where we are going -we believe that in a short while, (another year and half in the maximum) we should be reasonably self-sufficient in grains like rice, maize (and) beans.
“We may not achieve everything in wheat but we will be very close to our targets.
“Other things are also there in the roadmap, it’s quite a voluminous document but that is briefly what the council endorsed this afternoon.’’

On the proposed grazing reserves, the minister stated that the money for the programme budgeted in the 2016 fiscal year would be used to check the clashes between herdsmen and farmers across the country
In her own contribution, the Minister of Women Affairs Sen.Aisha Alhassan said that FEC also approved the handing over of two federal roads in Kaduna state to the state government.
According to Alhassan, the council has also approved the completion of the eastern by-pass project linking Kaduna state and other North Central states to the North-West.

“Council also considered the memo presented by Minister of Power, Works, Housing and Urban Development, for the re-designation of two roads in Kaduna State from being federal roads to state roads.
“There was a request by the Kaduna State governor (Nasir) el-Rufa’i to His Excellency, Mr President to have the two roads mentioned, the Nnamdi Azkiwe Express Way, that is `the Kaduna by-pass’ as it is popularly called, and then the popular Ahmadu Bello Way, which runs across inside Kaduna town.
“They are presently federal roads but he requested that they should be re-designated as state roads so that they will have the power to work on the road to make them better for Kaduna State indigenes.’’

How To Grow Sunflowers For Profit

AgroBusiness Times - November 28, 2016 0
Sunflowers is a viable business to start, as a matter of fact it is quite easy to grow and one of the good things...

INTERVIEW: How Nigeria can benefit from maintaining forests – Nnimmo Bassey