Nigeria, with teeming population, vast land and favourable climate, cannot produce enough food to feed the population. The reason for this abnormality is that more than 70 percent of the farmers in Nigeria use hand tools for their various farm operations. 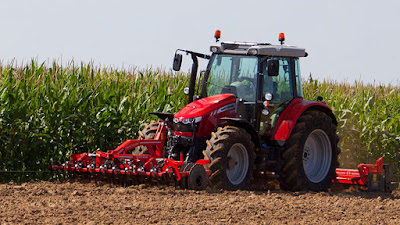 Use of hand tools like hoe and cutlass is laborious, tiring, time consuming and a highly inefficient method of food production. For example, it will take a five-man day for a highly experienced, hardworking, healthy and energetic man to weed one hectare of farm land while it take only a one man – day to perform the same task with an animal drawn implement.
When using a tractor (60 -75 horse power), it take one hour twenty minutes to perform the same task. Again, with hand tools, on the average, a man can produce food to meet dieting requirements for maximum of five people in a year. Under the same condition, with farm machinery, a man can produce enough food for more than 300 people in a year. This is why mechanisation is absolutely necessary for a nation to achieve self-sufficiency in food production. What is farm mechanisation?
Farm mechanisation is simply the replacement of hoe, other hand tools, and draught animals with tractors and other mechanically or electrically powered machinery and implements.  Mechanisation allows previously unutilised land to be brought under cultivation. This may be the result of the ability of tractors to perform deep tillage of hard soils as well as reclaim wasteland. It could also come about by bringing additional land under cultivation. Mechanisation results in timelier field operations with increased productivity.
Timeliness is essential for multiple cropping systems as is the case in Nigeria. Thus, there is need for timely land preparation between sequential crops, especially in irrigated agriculture. Similarly, Tractors and animal traction are not only useful for land preparation, but can also be used to power implements and equipment for other farm operations and maintenance of rural infrastructure. The same equipment also can be used for transporting produce to the market, as well as driving pumps and grain milling equipment.
Mechanisation can overcome seasonal shortages of labour or release labour in critical periods for other productive tasks. If labour is released for the production of other crops, total farm output should increase; for non-farm activities, overall household income should increase.
Another important benefit of Mechanisation is reduction of the drudgery associated with farm work, especially for power intensive operations such as tilling the land with a hand hoe. This is particularly important in many rural areas of Nigeria where high temperatures and humidity render farm work relying on human muscle power to be ergonomically quite difficult and arduous. Our low level of mechanisation is the reason making youths to shy away from the farm operations and prefer to look for white collar jobs in urban areas. As a result, the youths who should be the next generation of farmers, perceive farming as a world of drudgery for losers and thus, avoid it.
Generally, a farmer in Nigeria is seen as “a man with the hoe” in spite of decades of huge investments made in the agricultural sector by the government and international agencies. Recent statistics show that Nigeria is one of the least mechanised farming countries in the world, the average farm power input in Nigeria is 0.27 horse power per hectare which is far below the recommendation of 1.5 horse power per hectare by Food and Agriculture Organisation (FAO) of the United Nation.
To clearly see the picture, one should refer to the World Bank report of 2012. In the report, Nigeria had an average of seven tractors for every 100 square km of arable land compared to 100, 1,900 and 64,000 tractors respectively in Algeria, Ghana and South Africa for the same square km.
Today, most developed countries have moved from total reliance on human power to using tractors and implements. There is no doubt that mechanisation is a compulsory ingredient for boosting agricultural production and an unavoidable key to the realisation of the food security in Nigeria. In addition to improving production efficiency, mechanisation encourages large scale production and improves the quality of farm produce.
Nevertheless, despite numerous advantages, mechanisation has some disadvantages such as displacement of unskilled farm labour, causes environmental pollution, deforestation and soil erosion. The major disadvantage of mechanisation in Nigeria is high cost of acquisition. Prices of tractor and implements are expensive for example, a 65-horse power tractor without implements costs between six and eight million Naira, which is beyond the affordability of an average farmer. 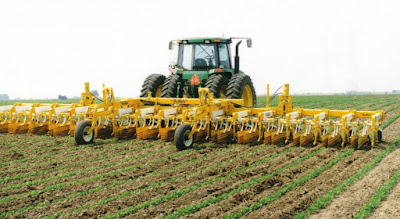 Again, introduction of high level mechanisation may have little advantage in subsistence farming as is predominantly the case in Nigeria. This is because it doesn’t provide sufficient cash income to pay for the equipment. Equipment, such as tractors, which may be put to other tasks to keep it as fully occupied as possible could have been encouraged but it is very difficult to find sufficient work at all times to occupy it fully throughout the year.
Some people have not seen any value in attempting to mechanise the actual cultural operation of these pockets – sized fragmented land holdings, confined as they are in narrow strips. The average land holding of farm in Nigeria is about 0.4 hectare per farmer. This is why promotion of high level mechanisation (tractorisation) faces a herculean task to achieve in the country.
No doubt, over the years, governments at states and federal levels have invested billions of Naira in importation of tractors and implements with little success in mechanising Nigerian agriculture. Professor Isaac N. Itodo, in his Lead Paper presented at 2013 NIAE conference in Uyo, stated that “Tractors have been bought year after year yet the mechanisation of our smallholder farms has remained dominated by the hoe-cutlass technology. Why is this so? The reason is that these smallholder farmers have not found it proﬁtable to increase the size of their holdings using these tractors.
What sense does it make to increase the size of area ploughed when there are no planters, boom sprayers and harvesters for the subsequent operations to guarantee timeliness of operation in a rain-fed agriculture? Increasing the size of ploughed fields without the capacity to hire the required workers to plant, weed and harvest on time has resulted in unforgivable losses to the farmers. The mechanisation of our smallholder farms will thrive if government provides a mix of farm machinery to famers. The farm size will increase with a commensurate increase in output”. This is partly responsible for farmers’ inability to increase the percentage of cultivated land area beyond the 40 percent of 85 million hectares of arable land in the country. So, what is the way forward?
The way forward is the development, promotion and adoption of improved indigenous technologies that are suitable to our farming system. The technologies have to be efficient for peasantry farming and affordable to the generality of farmers. Some patriotic Nigerians are making efforts in this direction. MAGLANDS CREATIONS, an indigenous private engineering company is one of such organisations involved in promoting the indigenous technologies suitable for small scale farmers.
As a modest contribution to the progress of farm mechanisation in Nigeria, the Engineers in MAGLANDS CREATIONS, have embarked in the fabrication/ production of workable and adoptable farm equipment such as Stick Planter for seeds, Serrated Weeding Hoe, Wheel Hoe, Seed Cum Fertilizer Broadcaster, Single Row Seed Planter, Multipurpose Seed drill, Rice Paddy Parboiler, Groundnut Stripper and Cassava Lifter/Harvester. The company is located in Ibadan, Oyo State.
The stick planter is an improvement to the direct manual planting. In traditional planting, the person carries the seeds in one hand and the traditional hoe in the other hand and has to bend down to plant. This practice is slow, tiresome and causes drudgery. The stick planter helps to prevent that. The stick planter is held in the right hand and the seeds to be planted in the left hand. It has a mechanism for planting the seeds and covering up while keeping the operator in standing posture. It is suitable for planting maize, Soya beans, cowpea, Groundnuts, Guinea corn, cotton, etc. It is suitability for light and medium soils. The planter has field capacity of 0.028ha/hr and an average of 30 man-hours per hectare.
A higher version of stick planter, produced by the company, is a Single Row Seed Planter. This is a complete machine with a Hopper of 3 kg capacity. It has mechanism for seed metering, furrow opening, planting and covering as the operator pushes it along the row. The single row planter can be used to plant various seeds such as maize, soya, rice, wheat, cotton and cowpea. Each crop has seed metering device suitable for the crop. The inter-row planter distance is adjustable depending on the agronomic requirements. The estimated field capacity is 1.076 ha/hr and labour requirement of 0.93 man-hr/ha.

AgroBusiness Times - February 19, 2017 1
INTRODUCTION: Egusi Melon Farming, also called “wild watermelon,” is grown throughout Nigeria and Congo for its seeds, which are high in protein and carbohydrates....