Failure to nurture the leather industry is costing Nigeria a lot in terms of loss of foreign exchange. To reverse this, experts see the closure of the Ponmo (hides) processing section of Oko-Oba Abbatoir, Lagos, as a positive step, as it is expected to boost supply of hides for export, reports, DANIEL ESSIET.

Exportation of hide, skin and leather products is big business that sustains a lot of producers, processors, brokers and dealers. This is because it is one of the top raw materials needed globally in the leather manufacturing industry.
China is the largest buyer of hides, same with Taiwan, the European Union (EU), Thailand and Vietnam.   But the Nigerian hides, skin and leather industry has not built a reputation as an agricultural export engine. This is linked to challenges related to cattle hide supplies, skin market access barriers and uncertain conditions in the leather manufacturing sectors.
Despite the increasing export value, the hides and skins industry faces a shortage of supplies, even as   cattle slaughter rates have increased to 2,000 cows daily in places, such as Oko Oba Abattoir, Lagos.  There is a continued trend of increasing slaughter rates and cattle hide availability.
But the challenge is that the hide (cow skin) is eaten largely as ponmo  than being used as leather for shoe lining.
President, Animal Science Association of Nigeria (ASAN), Pastor Taiwo Adeoye, noted that ponmo derived from hides, a material critical for tanneries, has been popularised mostly by the people of the Southwest.
Combined with sheep and goat skins from an average of 15,000 slaughtered daily, leather potential in Lagos State alone can fetch more than $5 billion in value-added products. The more than 5,000 slaughtered cattle hides available daily nationwide, if used for leather products, will fetch about N624 billion locally, aside foreign exchange earnings and jobs created.
The consumption of cow skin, he said, has been an age-long practice which no government has been able to stop, adding that the industry is creating jobs, but that it ought to provide more if repositioned and made a major agricultural exports.
Nigeria, according to him, is losing out in the pack of countries competing for the $75 billion global leather industry because of ponmo consumption. He  blamed the situation on the country’s neglect of leather products in favour of oil production and consumption of its hides and skin as ponmo.
He said before ponmo was brought to the market, a lot of various unhygienic substances, such as trash, wood, charcoal, rubber tyres and so on, are thrown into the furnace to sustain the blazing heat. To  prevent this, the Lagos State Government has shut and dislodged the cow skin processing section of the Oko-Oba abattoir and Lairage Complex in Agege.
A statement by Tunbosun Ogunbanwo, Asst. Director, Public Affairs, Lagos State Ministry of Agriculture, said the Commissioner for Agriculture, Mr. Toyin Suarau, led a team from the ministry in the company of men of the state Task Force to shut down the cow skin section of the abattoir.
Suarau said: “Closure of the ponmo section and dislodgment of the processors became necessary because of the health hazards inherent in the unhealthy processing of ponmo.
“The ponmo processors use heaps of burning tyres, thereby, emitting thick toxic smoke into the air endangering residents of the adjoining neighbourhood. This bonfire emits a thick toxic smoke, which spreads from within the complex to adjoining neighbourhoods, endangering lives including those of the processors themselves.’’
The commissioner stressed that the toxic smoke and unhygienic way of processing the cow skin was harmful to human health.
“I wish to make it clear that the use of tyres for cow skin processing was reported to the state government sometime ago and was dealt with. The return to this unhygienic method of processing in the complex leaves much to be desired and this is why the state has closed the ponmo section of the complex,” he said. 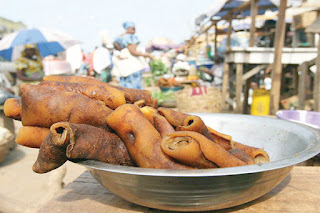 He noted that the health effects of burning tyres alone are enormous, let alone using them to process human food. He pointed out that burning tyres releases toxic soup with hundreds of the various toxic pollutants and small particles.
Such pollutants, according to him, settle deep in the lungs while airborne emissions from open tyre fires present serious impact to health and the environment.
Suarau said the state would not condone any act of illegality and harmful health practices in any of its abattoirs, adding,  “to this end, the state government has deployed a number of veterinary officers, animal workers to abattoirs to ensure that set standard for animal slaughtering and processing are adhered to”.
“The state government would continue to monitor abattoirs and slaughter slabs and would not hesitate to close down abattoirs and slaughter slabs that are unhygienic.
“Also, slaughter slabs and abattoirs which are not compliant with the relevant laws governing meat slaughtering in the state, will be closed down.”
He said animal slaughtering and processing have called for serious attention because the animals must be inspected before and after their slaughtering according to the meat inspection law.
Meanwhile, Registrar, Nigerian Institute of Animal Science, Prof Emmanuel Iyayi, has commended Lagos State on the closure, hoping  it would discourage the consumption of the popular delicacy.
He said his organisation will support any step taken by the government to promote healthy and profitable use of hides and skins for export growth.
The former Minister of Agriculture, Dr. Akinwunmi Adesina, last year said  the Federal government, may have concluded plans to discourage the consumption of the popular delicacy.
Adesina told stakeholders at a seminar that the primary consumption of livestock products may need to be reduced because of the need to promote the use of hides and skin for leather production.
Generally, the love and demand for “ponmo’’ meat keep rising by the day.