Beside low food production that hallmarked the continent’s agrarian economy, post-harvest losses have become the major challenge besetting the quest for food security. 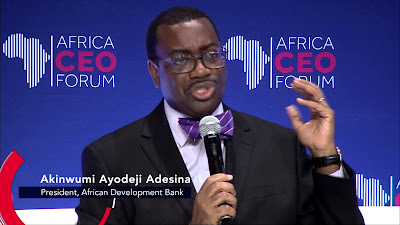 But the President of African Development Bank (AfDB), Akinwumi Adesina, has reiterated the importance of policy regulations to end the losses in the continent that spends $35 billion on food imports each year.
“Massive quantities of food crops, fresh fruits and vegetables and dairy products go to waste in rural areas, while Africa depends on food imports,” President Adesina said.
Adesina underlined the importance of policies to support the establishment of private sector-driven food processing and manufacturing companies in rural areas to deal with the immense food waste, enough to feed at least 300 million people a year.
“That is more than the 250 million people that go hungry each year in Africa,” he told a session on the “Role of Policy in Enabling Public-Private Partnerships to Achieve African Agricultural Transformation,” he said.
He noted that, despite accounting for some 32% of the continent’s Gross Domestic Product, the agriculture sector receives less than three per cent of the banking sector’s financing, but called on governments to address failures and reduce the risks facing the financial sector that block lending to agriculture.
Adesina cited Nigeria as having successfully developed a national risk-sharing facility for banks to lend to agriculture- the Nigeria Incentive-Based Risk Sharing System for Agricultural Lending (NIRSAL).
He said that the country witnessed a 600% increase in lending by banks to the agriculture sector, rising from 0.7% of total bank lending to five per cent within four years. This has since led to banks establishing their own agricultural lending desks.
Reports indicate that post-harvest losses (PHL) in Africa are equivalent to the annual caloric requirement of 48 million people, and worth $4 billion in lost revenue per year.
The agro-allied industrial zones and staple-crop processing zones in rural areas, supported with consolidated infrastructure, including roads, water, electricity, will drive down the cost of doing business for private food and agribusiness firms, Adesina said.
They will also create markets for farmers, boost economic opportunities in rural areas, stimulate jobs and attract higher domestic and foreign investments in the rural areas.
“They will turn the rural areas into zones of economic prosperity,” he said.
Kenya has instituted policies to accommodate crop processing, such as macadamia nuts, the country’s Minister of Agriculture, Livestock and Fisheries, Willy Bett, told the forum.
“We have changed our policies to include processing of macadamia nuts. We want production and processing to be done here so that we boost the industry and mostly the local farmers,” he stated.
The inability of farmers to access insurance and finance was emphasised as a major setback to agriculture, with the Director-General of the International Food Policy Research Institute, Shenggen Fan, blaming this for making farmers susceptible to shocks.
He said access to financing was necessary to protect farmers against vulnerability.
Also, investments in science, technology and innovation in Africa’s agriculture were reiterated equally, by Dominique Charron, the Director for Agriculture and Environment at the Ottawa-based International Development Research Centre.
“If you want to transform agriculture, we need to invest in innovation, ICT, science, and help build the capacity of Africa’s farmers in these areas,” Charron said.
She called for part of the financial pledges to agriculture made by several organisations to be channeled toward innovation, ICT and science.

Protest Rocks Federal College Of Agriculture Over Sacking Of Provost