Abia State government has acquired about 8,000 hectares of land to effect oil palm revolution in the state. 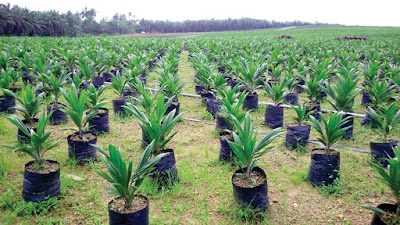 The Commissioner of Agriculture, Uzor Azubuike, who announced this during the flag off of the two million oil palm seedlings planting, as part of the state oil palm revolution, held at Ahiaba Umueze in Osisioma Ngwa local government area, said the scheme, “community oil palm project,” would also raise the peoples’ consciousness, as well as, motivate them to embark on agriculture and oil palm practice as one of the means of surviving the prevailing economic uncertainties.
He explained that the project was also designed to avail communities who are desirous of changing the aging wild species of palm fruits prevalent in Africa, the opportunity to change and replant the improved variety seedlings.
Azubuike said the communities will directly be involved in the maintenance of the palm project, as well as, take ownership of the farms, but not the plantation, adding that the revenue accruing from the venture will go to the communities and by so doing, creating wealth in the communities.
According to him, government will however, come in by developing the value chain through which it willcollect taxes and thus create employment opportunities  He added that the seedlings will not however, be given to communities free, indicating that government will work with only communities that are ready to partner with it on the project.

AgroBusiness Times - December 11, 2016 0
“Bee keeping/honey production is one agricultural business that you don't wait to sell your product; before you produce buyers are already queued up to...

No herdsmen or Almajiri in Imo — Uzodimma assures

10,000 farmers to benefit from World Bank-assisted project in Lagos

FG To Distribute Farm Inputs To 140,000 Farmers In Jigawa